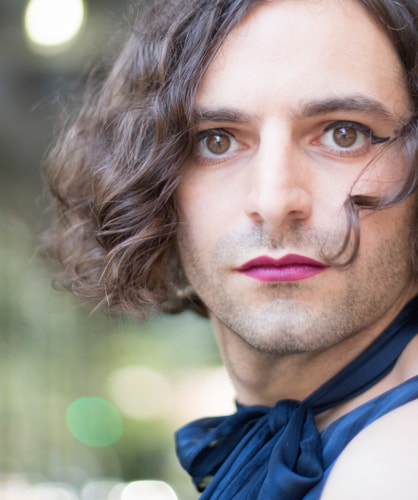 I was assigned male at birth, but I’m not a man or a woman—I’m genderqueer. It took many years for me to grow into that identity. As a small child, I wanted to be all the genders. I wanted to get dirty, play with sticks, and find bugs. And then I wanted to paint my nails in a tutu and play jump rope.

It took many years for me to grow into that identity

As a teenager, I felt social pressure to be masculine. There was real policing about gender identity. It was clear what was allowed for boys and what was not.

I began to understand my identity through books. In school, we weren’t taught much LGBTQ history. But outside of school I read a book called Making Gay History. I discovered that I was part of a tradition. Gender-nonconformity has always been around. I’m not an anomaly. I’m a foundational part of the human story. That knowledge has helped me break through my sense of isolation.

Still, I’ve struggled to accept my own identity as real. People have assumed that I’m gay, or that I’m trans and identify as a woman. People have told me, “It’s just a phase.” I have to remind myself that it’s not. It’s not something I’m making up. I’m not doing it for attention.

It’s deeply rooted within me.

It can be a daily struggle to be out in public. If I walk down the street in a cute dress, I get heckled and stared at. But I don’t want to let other people control my life. I started wearing headphones in public to navigate around these obstacles. People mess with you less when you wear headphones. And I learned to tune out hostility. As long as people let me keep walking, I’ll keep walking. I’ve been lucky. For some friends—especially trans women of color—the abuse has been worse.

I draw so much strength from my community. Lots of people in my support network are queer or trans. But lots of people aren’t—they’re just friends I’ve known a long time. I don’t know how I’d process things without them.

The goal I’m working towards is to enjoy feeling natural and happy in my body, the way everyone feels when they’re four years old. I love dancing with good friends, especially when I can be tacky and weird and silly. Since I moved to California, I’ve been fascinated with plants and nature. Cacti are incredible! When you’re a person the world is trying to erase, enjoying the world is truly radical.